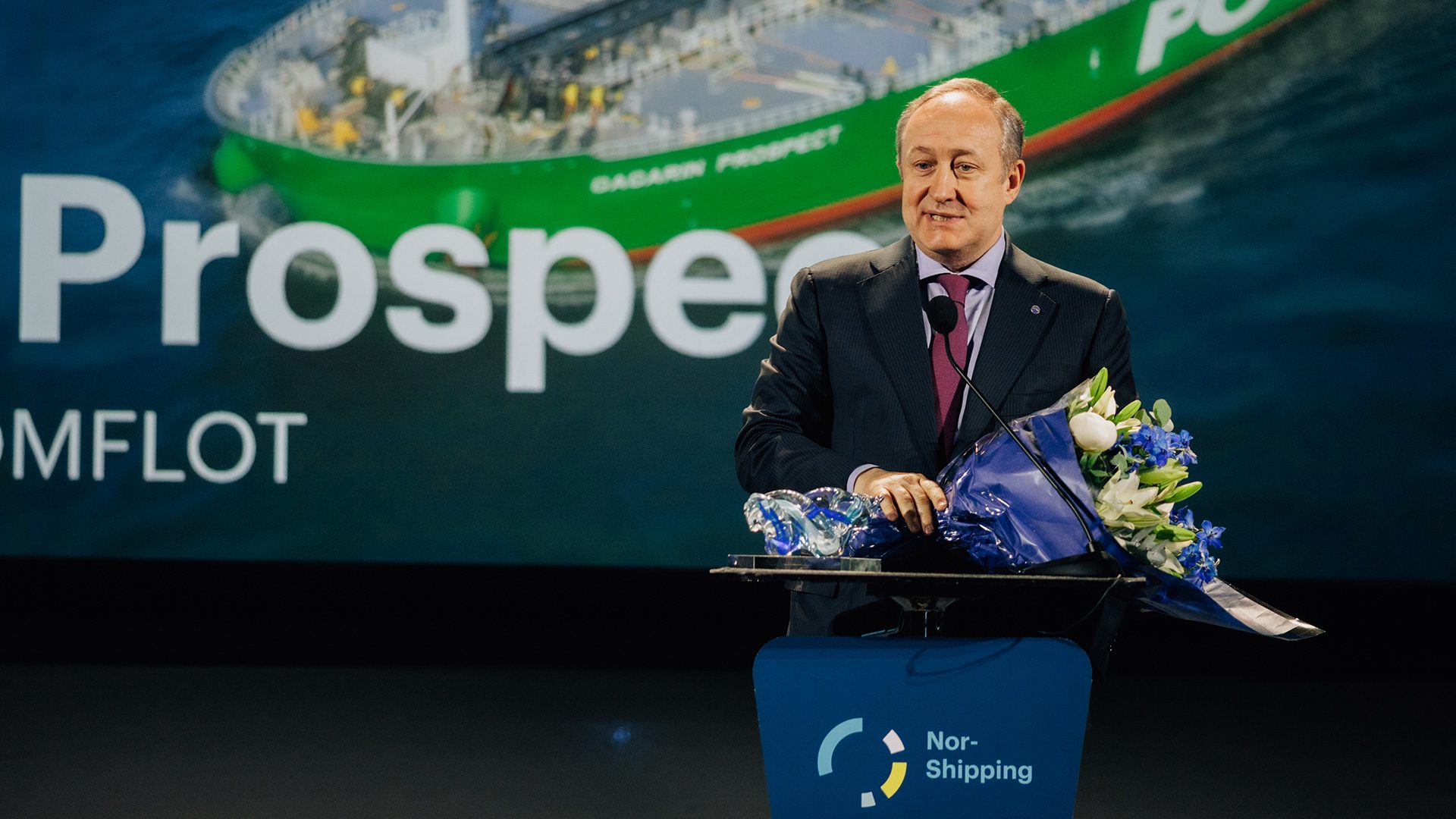 Gagarin Prospect, the world’s first Aframax tanker designed to run on LNG, has been crowned as the winner of the Nor-Shipping 2019 Next Generation Ship Award. The accolade, awarded by Norwegian Minister of Trade Torbjørn Røe Isaksen at the Nor-Shipping Opening Ceremony, saw the Sovcomflot vessel defeat a competitive shortlist that featured Yara Birkeland, alongside innovative shuttle tanker concepts from AET and Teekay.

The Next Generation Ship Award is a celebration of innovation in ship design and technology. It has become an integral part of Nor-Shipping since its launch in 2011. This year the award has been combined with the Energy Efficiency Award and opened to existing ships built since the last Nor-Shipping exhibition in 2017, to older ships which have undergone retrofit or conversion, and to newbuildings scheduled to debut over the next five years. It made for a competing field that was, Jury Chairman Malcolm Latarche notes, almost too close to call.

Passionate debate
“I have been involved with these awards since they were first inaugurated and I cannot recall a time when there was such a passionate discussion about the merits of the shortlisted candidates. There was fierce debate among the jury as to which of the four ships had the best claim to the title, with the result being a majority rather than a unanimous decision.

The jury’s final decision went to Gagarin Prospect with the argument that while it may not be as technologically advanced as some of the other contenders that are still under construction, the decision to build the ship was bold, and taken at the beginning of the seven year time span covered by the award.

“When ordered, LNG fuelling infrastructure was in its infancy with no guarantee it would improve at the rate it has. The ship was also ordered without a long-term charter in place, making the decision a pioneering one which many of the jury felt fully reflected the ethos of the Next Generation Award criteria”.

Green focus
Gagarin Prospect was delivered from Hyundai Samho Heavy Industries in July 2018 and is now time-chartered to Shell for up to ten years. She is the first of an initial order of six such vessels by Sovcomflot as part of its ‘Green Funnel’ initiative. This was launched in partnership with Shell to introduce LNG as a primary fuel for large-capacity tankers and, in general, for vessels not tied to fixed routes or set timetables. 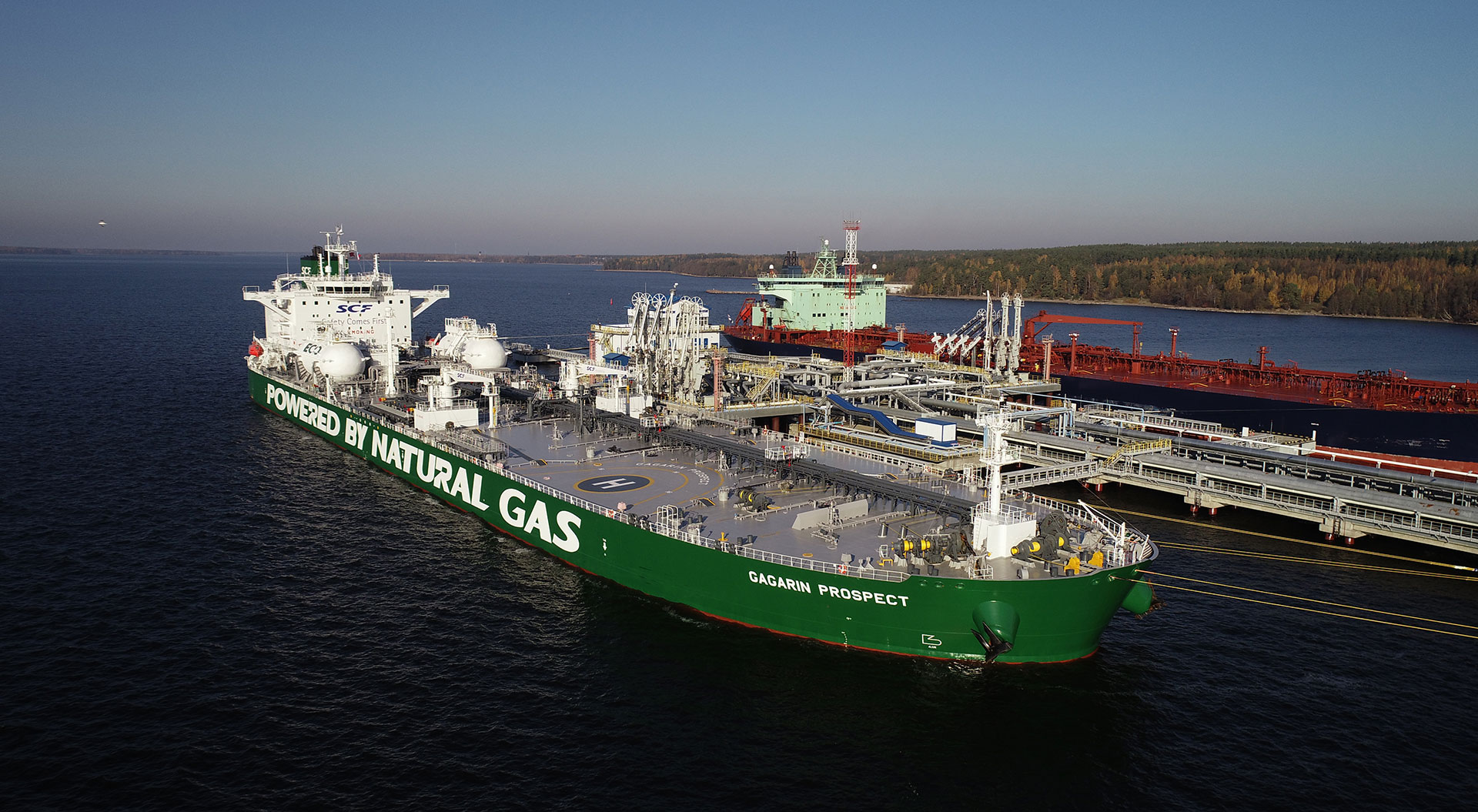 With her ice class 1A hull, Gagarin Prospect is designed for year-round export operations from areas with challenging ice conditions. She is equipped with ice radars and spotlights, ensuring full compliance with the recently introduced Polar Code. Her main engines, auxiliaries, and boilers are dual fuel and the ship runs regularly on LNG. She is fitted with a low-pressure X-DF dual fuel engine, to minimise emissions of particulate matter. When not utilising LNG fuel, the installation of Selective Catalytic Reduction (SCR) technology enables her to comply with the Tier III regulations governing NOx emissions.

Defining new standards
Speaking about this year’s award, Nor-Shipping Director Per Martin Tanggaard comments: “It was a quite breath-taking shortlist for this first year of our combined award, demonstrating the degree of ambition and innovation defining modern shipbuilding. I believe we have a worthy winner in Gagarin Prospect, but all of these vessels will no doubt go on to be winners in the wider marketplace – creating new standards for efficient, productive and environmentally focused shipping assets. Well done to everyone in what was truly a stand out year.”

Ships are long term assets and in a fast moving world of technological innovation keeping ahead of the pack means either integrating the advances in newbuildings or giving existing ships a new edge by retrofit or conversion. We are showcasing all of the entries for this year’s award in a series of articles. They are presented in the order of entry date and thus nothing about their chances of success in the awards should be inferred.