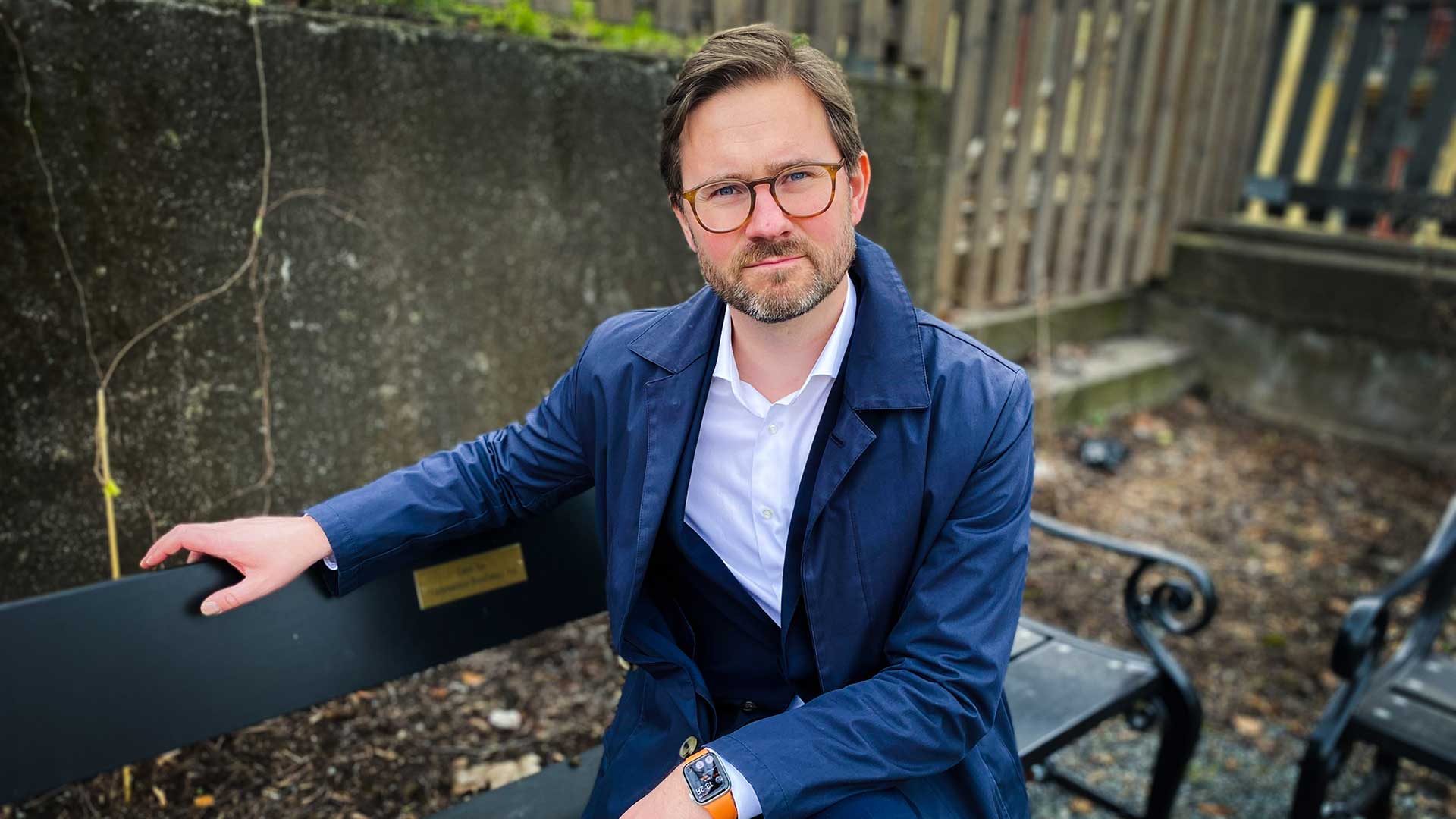 Banking on the future

Jan Ole Huseby, Head of Ocean Industries at DNB, looks back over an unforgettable year in business – and life – while scanning the post-pandemic horizon for the bright spots ahead. Face-to-face interaction, at the newly scheduled Nor-Shipping 2022, provides a clear ray of hope.

Jan Ole Huseby must have thought it was a joke when he got the start date for a new role at DNB.
The incoming Head of Ocean Industries, taking over from the renowned Kristin Holth, was set to begin on 1 April. April Fool’s Day. In the opening weeks of the coronavirus pandemic, with two small children and a national lockdown of schools and nurseries.
“Yes, I guess you could say it wasn’t optimal,” he laughs down the phone from his (home) office in Oslo. “But at the same time, it was certainly interesting!”
A quote coming in as an early contender for ‘understatement of the year’.
To solve the dilemma, he, his wife and kids (then aged one and three), temporarily moved to his parents’ house in nearby Tønsberg to juggle jobs, childcare and a busy family life. This left 43-year-old Huseby to begin a position looking after an investment portfolio of around USD 28billion, and a team of about 140 ocean finance experts, from his mum and dad’s spare bedroom.
“I’m back now,” he stresses quickly, engagingly aware of the bizarre scenario, in what was a frankly bizarre year, adding, “and somewhat more settled in.
“I need to be. There’s a lot of work to do.”
Understatement of 2021, number two.

View from the top

DNB is intrinsically linked to the blue economy.
Traditionally viewed as one of the leading maritime and offshore finance institutions – it still is – the Norwegian international giant has transitioned to view the ocean space as a single business area. One that is defined not only by the sea, but also by an increasing degree of crossover, collaboration and consolidation.
Huseby too has transitioned, moving from a position of Global Head of Ocean Services (essentially Offshore and Oilfield Services) to the new, all-encompassing role. It’s given him a unique perspective over a commercial arena that takes in everything from shipping, to oil and gas, aquaculture and renewables – perfectly positioning him to comment on the fluctuations of fortune we’ve all experienced in an incredible, unforgettable year in business.
“2020 was a very mixed bag,” he begins, navigating initially towards shipping – an unsurprising move for a keen sailor and former Astrup Fearnley broker. “Some sectors have suffered while others have prospered, but overall I think maritime has held up better than perhaps most anticipated.”
In the ‘suffering’ corner Cruise is an obvious first pick – “they’re essentially the tourism and hospitality sectors, combined, so their position has been more precarious than most” – while Car Carriers were put on the canvas early on, only to return, fighting fit, to their feet. Tankers, he points out, had a memorable first half of the year, as the low oil price drove the market to stock up on inventories, but then slowed. Other segments, he says, have generally been more impacted by seasonal variations and cycles, rather than the pandemic per se.
“But the offshore and oil service segment,” Huseby notes, “is a little more complicated.”

The industry has, he explains, been in “restructuring mode” since the oil price dive of 2014/15, consolidating business, renewing and discarding assets and essentially limbering up for a new energy reality.
“We were starting to see positive signs,” he says, “with the first quarter showing a move in the right direction. However, when the pandemic struck that all changed – with demand shrinking by around 25% almost overnight, falling prices, and the majority of oil majors putting investment decisions on hold. That was a huge setback for the services suppliers and, to be frank, very few had the balance sheets to handle that kind of liquidity squeeze.”
Huseby says many were on the brink of a long-awaited recovery, only to be plunged back into financial insecurity.
“How do you come back from that?” he asks. “It’s very difficult, especially when investors aren’t exactly racing to the segment right now. However, I will say this – those assets are still going to be very important in the development of the ocean space in the years to come, so there are opportunities going forwards.
“But first there needs to a rationalisation of supply, to create a better balance. Once that happens we may see a new impetus for investment.
“However, I think 2021 is going to be another challenging year, I’m afraid.”

It’s certainly not all doom and gloom though. Huseby admits to being an optimist by nature and sees enormous potential within a range of ocean sectors.
Energy and nutrition are, he states, obvious bright spots, with a growing world population driving burgeoning demand, albeit with a need to minimise carbon footprints. Both areas are central to DNB’s plans.
“Seafood is a critical component of the ocean economy, and it’s importance is only growing,” he comments. “When we look at aquaculture specifically, the pandemic delivered some challenges, but that was mainly on the logistics side – with supply shifting away from restaurants and catering to retail and consumers – while salmon prices generally held up. As the call for healthy, plentiful and increasingly carbon neutral foodstuffs gathers pace then the long-term potential here is clear. As such it’ll be attractive for capital and a growing part of DNB’s portfolio.”
As will wind. Huseby mentions hydrogen, gas and seabed minerals in passing, but offshore wind captures his attention for longer. He opines that the Norwegian cluster is “very well positioned for future development” and that DNB has been involved in “almost all” of the major transactions in the segment over the course of the last year.
“The installation and servicing segments are very promising and DNB has staked a strong claim in their development. The offshore and shipping experience we have reflects that of Norway itself and that will be a key factor in enabling the expansion of wind – driving business for the cluster here, as well as for DNB and its stakeholders.
“The diversity of competence we can offer,” he explains, “allows us to really support ocean business as a whole, and that’s an exciting prospect looking ahead.”

Another exciting prospect is Nor-Shipping 2022.
DNB has once again confirmed its position as Main Partner at Your Arena for Ocean Solutions, alongside DNV GL, and is supportive of the decision to move the event week back from its original summer 2021 calendar slot to January 2022.
“The main attraction of Nor-Shipping is the calibre of its participants,” he says, quickly adding, “and the opportunity to actually meet them face-to-face. The importance of that interaction, that opportunity to build connections and understanding, can’t be overstated.”
He continues: “It has the unique ability to gather stakeholders from every commercial segment within the ocean space, and from over the world, in one location. The fact that that place is Norway, not just my home, but home to an outstanding business cluster, makes it all the more exciting.”
“That is a huge draw in its own right, but in the context of the global pandemic, when we’ve all had to endure such a lengthy period of isolation, it becomes even more important. That quality, and those benefits, must be preserved, so the delay – although it’s a shame – is necessary, and, as far as I’m concerned, absolutely the right move. It just gives us a little longer for that anticipation to build!”

Huseby is keen to build on this sense of enthusiasm and end the conversation on an optimistic note, wary of the fact that – with all the pandemic talk – positivity is a currency in short supply.
“Make no mistake, the ocean industries are a clear growth area,” he states. “OECD has forecast a surge in value creation by 2030 and governments worldwide, such as here in Norway, have tailored blue economic strategies that put an emphasis on opportunity, innovation and sustainable development.
“There is an appetite for investments that support these ambitions, so capital is available. There are real opportunities ahead.”
The amiable Huseby stops short of forecasting ‘plain sailing’ for his key business sectors in 2021, but states a firm belief that the next year shouldn’t be quite as “traumatic” as the last one.
His family, one expects, may be inclined to agree with him…